Celtic vs the rangers... 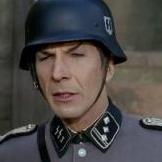 it widely means "technically competent but unable to excel" so nothing to do with your assessment of the Scottish Premiership (the SPL hasn't existed for a number of years).  But event basing it